The next phase, however, will be more . . . tactical. It will be anything but clean. It will be . . . gruesome . . . really. You're likely to witness great devastation, horrific carnage." He stopped to suck some more on the candy.

Book #3 in the "Murder Becomes" Series 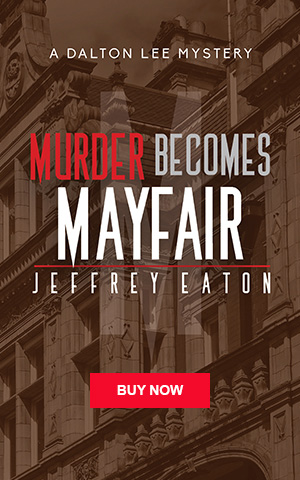 The corpse of a mild-mannered tailor working on Savile Row is found in a wooded corner of a park in London's tony Mayfair district. On his body is The Organization's telltale "calling card," a signal that the sinister cult is preparing to launch its next terror plot against the people of Great Britain.

Dalton Lee and his team of architect/detectives arrive in London to find an abundance of suspects whom The Organization could have embedded in the victim's life: an ex-girlfriend and her mysterious shop assistant, a belligerent bocce competitor, a work colleague with great disdain for the deceased, as well as waitresses he befriended and a customer he angered.

A swatch of silk in a tree branch, footprints in the mud, and a plea for help left on a restaurant napkin all seem to be clues as to who murdered Antonio Tinti . . . and how his seemingly quiet life intersected with the plans of international terrorists. But can Lee and his team determine who the murderer is before The Organization’s horrific scheme starts to unfold?

As he did in Manhattan and Miami, Dalton Lee becomes obsessed in Mayfair with an architectural detail – this time, the fence surrounding the scene of the murder. However, at the very moment Lee deduces who assassinated the tailor, he and his colleagues within Scotland Yard learn they’ve been distracted from the actual terror plot that’s about to get underway.

A fickle fog, red sprites in the night sky, sculptures that talk, and a clandestine meeting in a creepy carnival ground combine to make Murder Becomes Mayfair an eerie, atmospheric adventure set against the backdrop of London’s spectacular architecture.

They sat at the back of one of the subway cars, side by side, silent. To the disinterested observer, it would appear they were traveling together, and to a certain degree, they were.

But they had entered the car at completely different tube stops and had not spoken a word during the entire trip.

"I love to ride the Underground late at night," one said to the gentleman nearby. "I love how quiet it gets, especially this far out." They were on the District line, passing through Hornchurch on their way to Upminster, the line's final stop. The cars traveled above ground here, but most of the scenery was obliterated by darkness outside the windows and grime upon them. Only one other person was in their car, a young black male with a vaguely Rastafarian air, who sat several seats in front of them, eyes closed. He was slumped against the window, listening to music through a pair of grimy earbuds. He had paid them no notice for as long as they’d been in the car.

The other person turned his head to peer out the window.

"Yes, thanks to you, we do have one less person standing in the way," he said. "We are truly grateful for the service you provided. However, we need for you to stay a bit longer."

The interruption had been swift, but gentle. Still, the comment came across more as a declaration than a request.

A long sigh exited his nostrils. The car jostled some as it banked a curve, the rhythmic clack of the wheels against the rails took up the temporary void.

"Not long. A week, maybe two. We need to keep you close by for a while. It’s standard operating procedure at this stage of The Transformation."

Headlights from a nearby motorway flashed throughout the carriage as it raced past the automobiles and lorries; the car swayed once again, before settling onto a smooth straightaway.

"Would everything remain the same? I mean, my benefits, my fee?"

"Of course. Absolutely. Same as it has been. Low key, undercover. Again, it should only be for a week or two. Three at the most."

The conversation ended. The subway car began to brake; soon it would be arriving at the Upminster stop.

"Oh, sorry," he added. "There is one thing that will be different." His companion turned and was surprised by the grave expression the speaker exhibited.

"The phase of the project you executed for us in Hanover Square was – how should I say it – very strategic. Very precise. Very clean." The speaker plunged one hand into a jacket pocket, extracted a Malteser, and tucked it underneath his tongue. Slurped on it quietly for a couple of moments then resumed the conversation.

"The next phase, however, will be more . . . tactical. It will be anything but clean. It will be . . . gruesome . . . really. You're likely to witness great devastation, horrific carnage." He stopped to suck some more on the candy.

The passenger near the front of the car stirred some, then fell back against the window. Suddenly, the brakes screeched, and the car jerked, as it began to enter the line's last station.

"I am willing to do whatever it takes to overthrow the powers that be," came the reply. It was issued softly, as if it were an incantation being recited before candles. "I have said it before and I will say it again. Power to the cause."

The train was grinding to a slow lurch. The glaring lights from the station platforms began to appear up ahead.

The person in the jacket swallowed the malted milk ball in one quick gulp, flashed a forced smile in the other’s direction.

"Yes," he replied. "Most certainly. Power to the cause, indeed."

Pre-order Murder Becomes Mayfair from our own independent publishing company, The Cornet Group.

Buy Murder Becomes Mayfair for your Kindle from Amazon.

Murder Becomes Mayfair is coming soon from Apple for your iBook.

Murder Becomes Mayfair is coming soon for your NOOK from Barnes & Noble.